Seikatsu Club Chiba* has installed a Farm-Based Solar Power Generation Facility known as Agrivoltaic or Solar Sharing, and named "it Fasoran" at the Seikatsu Club Niji to Kaze Farm** in Yachimata City, Chiba Prefecture. It is operated jointly with the social welfare corporation Seikatsu Club "Kaze no Mura". On May 19, an opening ceremony was held to commemorate the start of the project. 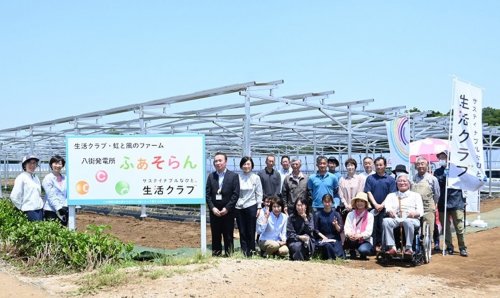 Farm-based solar power generation (Solar sharing) is a system in which solar panels are installed on farmland with the aim to use the sun's energy for both agriculture and generating electricity. By designing the solar power generation system to match the size of the farm machinery, tractors can be used for farm work as before. 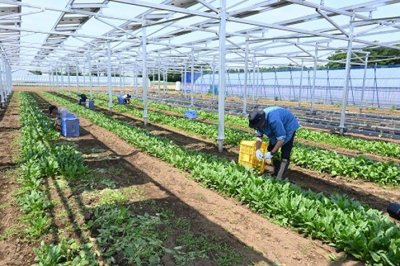 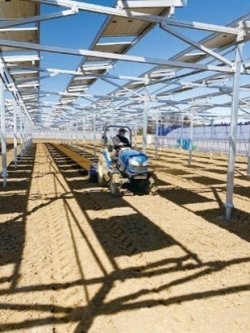 Solar panels have a shading rate of about 30%, so vegetables are properly exposed to sunlight.
The nickname "Fasoran" was chosen from names proposed by the co-op members. In addition, the signboard that is currently being prepared for installation is funded by donations from co-op members. The construction is also subsidized by the Seikatsu Club Natural (Renewable) Energy Fund***. The electricity generated by Fasoran will be delivered to Seikatsu Club member households as Seikatsu Club Denki (electricity). 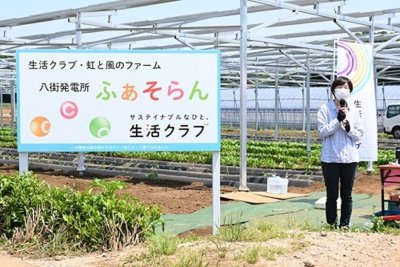 In the picture is the Seikatsu Club member who is the godmother of " Fasoran."
The opening ceremony was attended by 29 people, including the Deputy Mayor of Yachimata City, the people who were involved with the farm, and those who coordinated the construction of the solar power generation facility. The ceremony included the unveiling of the Fasoran signboard, planting of sweet potato seedlings and sunflower seeds, and other activities to celebrate the opening of the facility. 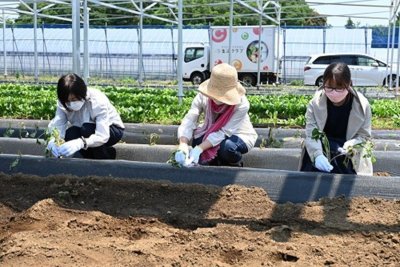 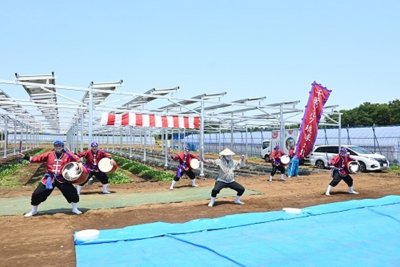 (Left) Seikatsu Club members planting sweet potatoes "Beniharuka"
(Right) Eisa (dance) performance by Chiba Darc, who is involved in agricultural guidance
*Seikatsu Club Chiba is a consumer co-op with a membership of 44,372 (as of 2021) and it's engaged in businesses such as home delivery, store, insurance, and electricity services in Chiba Prefecture.
** The Niji to Kaze Farm was opened by Seikatsu Club Chiba in 2019 with the aim of reducing the amount of abandoned farmland in the prefecture and providing a place to practice universal agriculture in which a diverse range of people can participate and enjoy the various benefits of agriculture. In April 2022, it also became an employment support office "Nochusha Yachimata", a place for the employment of the disabled. With the operation of "Fasoran," Niji to Kaze Farm has become a place of self-sufficiency in food and energy, and a place of regeneration and symbiosis where a diverse range of people gather, work, and interact.
***A fund is set aside monthly along with electricity charges from members who have subscribed to Seikatsu Club Denki, on a voluntary basis. For those who participate, 5% of their electricity bill is added to their monthly electricity bill as a donation to the fund. The donated money is accumulated in the "Seikatsu Club Natural Energy Fund" and used for the development of renewable energy and energy conservation activities.
Overview of the Power Plant:
Nickname: Fasoran
Area: 45 m (length) x 22.5 m (width)
Average annual power generation: 74,665 kWh