JCCU holds the 72nd Annual General Assembly on June 17, 2022, in Tokyo, Japan.
In view of the impact of COVID-19 infection, the meeting was held mainly by written voting, while some members attended in person this year.
Out of the 656 representatives to the General Assembly, 150 attended in person, no attendance by proxy, and 505 in writing, making it a total attendance of 655. All the five bills including the FY2021 business and financial reports, the FY2022 business plan, and the budget were passed by majority votes. 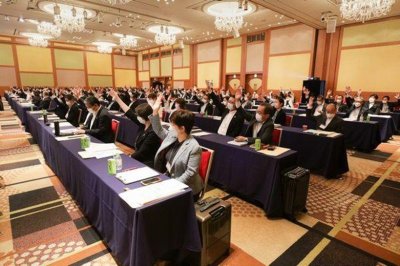 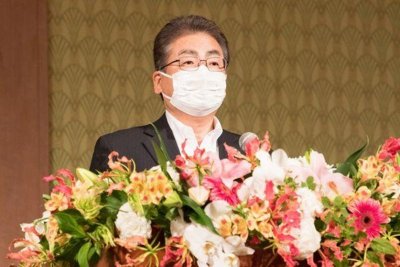 (Left) Voting on bills
(Right) Opening remarks from the President of JCCU, TSUCHIYA Toshio
In the opening remarks, the President of JCCU, TSUCHIYA Toshio, mentioned that the invasion of Ukraine by Russia that began in February of this year has drastically changed the world situation and cast a heavy shadow over the security of our lives. As a co-op that has been working under the slogan "For Peace and Better Life," JCCU issued a statement of protest and stated that JCCU is providing support to Ukraine, through donations for humanitarian assistance.
He also expressed his determination to work with co-ops nationwide to strengthen preparations for natural disasters caused by extreme weather and major earthquakes, and to promote partnerships with governments, social welfare councils, and other organizations even in normal times. He also called for the co-ops to play their unique role by collaborating with various partners using the SDGs as the common denominator.
In the General Assembly, JCCU was honored to receive a congratulatory message from Mr. GOTO Shigeyuki, Minister of Health, Labour and Welfare (MHLW), which was read out on his behalf by Ms. YAMAMOTO Mari, Director of Social Welfare and War Victims' Relief Bureau, who was invited to the assembly as a guest of honor. Many other congratulatory messages from various dignitaries were also received, including a video message from Mr. NAKAYA Toru, President of the Japan Co-operative Alliance (JCA) and the President of JA-ZENCHU (Central Union of Agricultural Co-operatives). 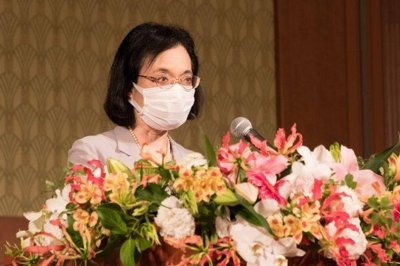 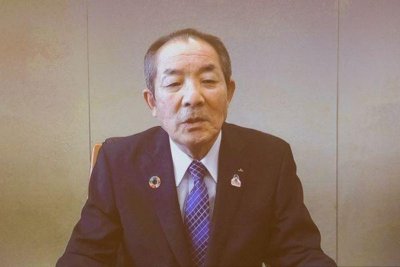 (Left) Ms. YAMAMOTO Mari, Director of Social Welfare and War Victims' Relief Bureau, Ministry of Health, Labour and Welfare
(Right) Video message from Mr. NAKAYA Toru, President of the Japan Co-operative Alliance (JCA)
There was a debate session after the bills were proposed, in which 15 representatives gave remarks, including a representative from a co-op based in the area affected by the heavy rain disaster in August 2021, who expressed gratitude for the support from consumer co-ops and co-op members nationwide and the importance of building face-to-face relationships on a daily basis in order to respond quickly and accurately to the needs of victims in the event of a disaster. Other topics included the followings: Peace efforts toward the abolition of nuclear weapons, new measures initiated for co-op members in areas with shopping difficulties, and efforts to renovate home delivery services.