Miyagi Co-op* has been organizing the "5 A DAY** Food Education Experience Tour" since 2005, in which elementary school children are provided the chance to raise their awareness in food dietary aspects as part of the subject in the school curriculum using the co-op members' meeting rooms at its co-op stores. In 2021, Miyagi Co-op continues to organize the "5 A DAY Food Education Experience Tour" with various elementary schools.
The first tour of 2021 which was held for three days (June 14, 16, and 21) was participated by 111 elementary school children. 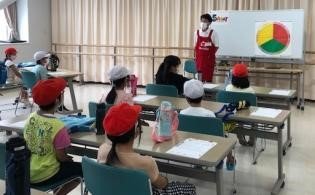 In the beginning, Ms. INOMATA, who was the instructor explained the importance of eating food and vegetables by using a diagram of three-color food groups. She divided the food into three groups, the yellow, the green, and the red by its functions and taught students what function each group of foods performs in their bodies. After that, it was followed by quiz questions where the children answered which food groups the teacher was talking about. When they answered correctly, they shouted "Yeah!"
The program also included a "Shopping Game", where the children were asked to shop within 1,000 yen at the store. However, some of the groups ended up spending more than 1,000 yen. 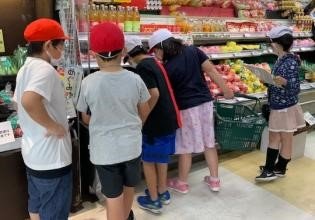 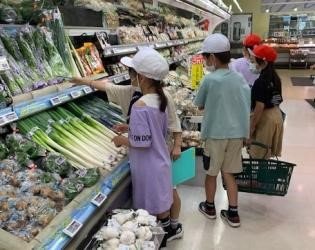 During the salad-making demonstration, Ms. INOMATA explained and showed the children how to make a salad, saying, "Cabbage and lettuce are similar, but don't make a mistake. The peeler's job is not only to peel the skin. ...".

After the study program, the children went back to school in a very cheerful mood.
The children made the following comments:
・I was happy to know that eating vegetables are important.
・I should be careful about the amount I eat. I learned that I should not eat too much oil and fatty foods.
・I liked the fact that the stickers on the "Megumino" vegetables had the names of the people who produced them.
・We learned a lot by shopping on our own.
・Learning with "Rock, Paper, Scissors" was good because it was easy to remember.
*Miyagi Co-op is engaged in a variety of businesses such as home delivery, stores, cultural program, and welfare services in the Miyagi and Fukushima prefectures in the Tohoku region of Japan. The membership of the Co-op is 961,849 as of March 20, 2021, representing 74.9% of households in the Miyagi Prefecture.
**5 A DAY is a health promotion movement that started in the United States in 1991. With the slogan "Eat at least five to nine servings of fruits and vegetables a day," the public and private sectors joined forces to promote the movement, and the results have been widespread, including an upward trend in the intake of fruits and vegetables and a downward trend in deaths from lifestyle-related diseases. In response to these achievements, the 5 A DAY Association was established in Japan in 2002.