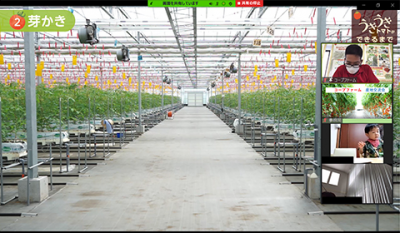 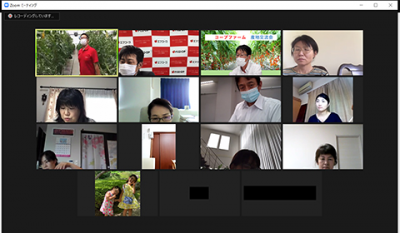 Questions raised at the exchange meeting:
"Is there any environmental problem with the emission of carbon dioxide?" "Will the remained plants to be used as fertilizer or something else after the fruits are harvested?" "How many products will not be able to be shipped?"
Comments from co-op members:
・Because it was held online, I was able to see the details clearly and hear what was being said very well. I could understand how hard producers work every day and how they take great care in growing their products.
・It was good to see the actual making of the product in the video, however, I was surprised to learn that one tomato plant can bear fruit for 37 to 40 weeks (I thought it would be shorter). The bees were also well taken care of, (since bees help tomatoes to pollinate) which made me feel warm and fuzzy.
2. Sanchoku Exchange meeting with "Marui JA" (Japanese Agricultural Co-operative):
On July 27, FCO-OP held the second production area exchange meeting of the year online. Twenty-five co-op members participated, and the producers explained their uncompromising approach to the production of Marui's eggs and chicken, and also showed the images of their facilities.
At the end of the meeting, a question and answer session was held where participants asked questions about the origin of the name "Marui", the ratio of male to female chickens, and the succession problem. 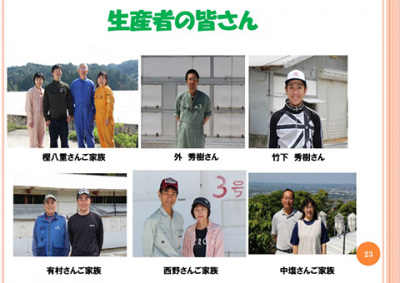 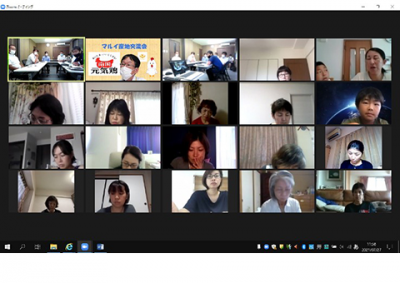 Comments from co-op members:
・It was good to be able to interact with people without having to go a long distance.
・I was glad that I could participate in this event because I could see how carefully the products are grown and shipped.
・It was good to know that the chickens are carefully grown in a clean and controlled environment. It was fun to see many eggs going through the production line in the factory and how cute the chicks were in the poultry house.
* "Co-op Sanchoku" is a specific type of community-supported agriculture philosophy, created by Japanese consumer co-ops in the early 1970s with the intention to promote safe and secure food production from the viewpoint of the consumer and also to address food and agricultural problems in Japan.
"Sanchoku" is a Japanese word translated as a direct transaction or direct buying route from producers to consumers without the use of wholesalers or any other medium of transaction.
**FCO・OP is a consumer co-op with approximately 530,000 members in Fukuoka Prefecture (as of April 2021), operating store and home delivery businesses.