JCCU on June 18, 2021, held the 71st Annual General Assembly at its headquarters Coop Plaza in Tokyo.
In order to prevent the spread of the COVID-19 infection, this year's General Assembly was held with the attendance of a limited number of people. Out of the 663 representatives to the General Assembly, 7 attended in person, no attendance by proxy, and 656 in writing. All the seven bills including the 2020 business and financial reports, the 2021 business plan, and the budget were passed by majority votes. 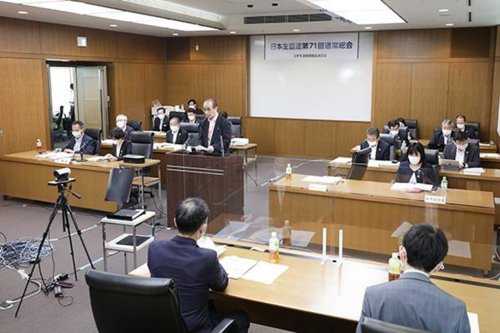 Opening Remarks：
At the opening, Eiichi Honda, President of JCCU, expressed his gratitude to co-ops nationwide for their daily efforts to meet the expectations of their members in the past year amid the spread of the COVID-19 infection. He also expressed his determination to utilize the various changes that are taking place in "the new normal brought by COVID-19" to create a desirable future for each one of us. He also called for further expansion of the areas where members can participate and connect, and exert their power together and also to create a community where people can live with peace of mind, while valuing the aspirations expressed in the 2030 Vision, "Creating the future with the power of connections". 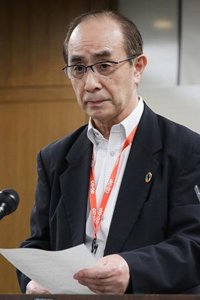 Opening remarks by HONDA Eiichi President of JCCU
Although there were no guests in attendance, JCCU received many congratulatory messages such as from the Minister of Health, Labour and Welfare, Mr. TAMURA Norihisa, various political parties, the ICA (International Cooperative Alliance), and friendship organizations.
FY2020 Business Report and the Election of New Board Members:
In the second agenda, the business report for the fiscal year 2020 was presented. From March 21, 2020, to March 20, 2021, the total sales of JCCU was about 440 billion JPY, (the previous year: about 392 billion JPY), and the net surplus for the year was 6.7 billion JPY, (previous year: 3.9 billion JPY).
In the fourth agenda, 39 directors and 6 auditors were elected. After the closing of the General Assembly, HONDA Eiichi retired as President of JCCU, and TSUCHIYA Toshio was appointed as a new President. 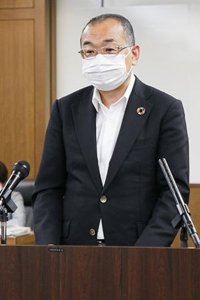 Report by SHIMADA Hiroyuki CEO/Managing Director, JCCU
General discussion:
In the general discussion session after the proposals, 17 messages on documents and videos submitted in advance by 20 member co-ops were delivered. A delegate from a member co-op who spoke on the theme "member activities in the midst of the COVID-19 threat" reported that while they were forced to refrain from holding hands-on gatherings such as factory tours and product study sessions to prevent the spread of the infection, they have responded to members' needs of wanting to learn and know by switching to activities that can be done at home such as "Co-op no uchikatsu (Co-op's stay at home activities)". In addition, discussions were held on a wide range of topics, including support for those in need due to the COVID-19 pandemic, disaster recovery efforts, promotion of digital transformation (DX) in business, and collaboration with local organizations.