In May 2012, Kanagawa Prefecture concluded an "Agreement on Community Watch over Activities" with businesses that visit individual homes such as co-ops, in order to quickly detect households at risk of dying in isolation and to provide administrative support so that everyone can live with a sense of security.
In addition to delivering goods, the 60 agreed-upon businesses are responsible for notifying the local government, police, and fire department when they find any unusual situation during a visit, such as newspapers or goods delivered being left unattended, which are anticipated life-threatening. As of December 2020, 1,103 calls had been reported, of which 109 were life-saving calls.
In August 2020, a female home delivery staff of U CO-OP delivered a meal to a woman in her 90s who was living alone but noticed that the meal that had been delivered the day before was left unattended. She felt something was wrong and contacted the local government. Thereafter, the woman was rescued illustrating one case example that someone escaped death.
Consumer Co-ops, together with agricultural co-operatives, credit unions, and other co-operatives support to watch over the citizens of the prefecture. 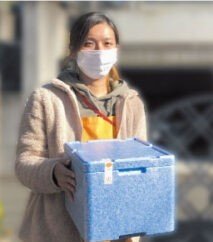 A home delivery staff of U CO-OP