Co-op Kobe has formulated a "Basic Policy on the Use of Plastic" and is promoting initiatives such as simplification of product packaging, the use of reusable shopping bag, and the recycling of plastics with the aim of reducing the consumption of plastics by 25% by 2030 (compared to fiscal 2017).
As part of this initiative, from 12 to 31 January 2021, they cooperated in a demonstration experiment organized by Kobe City for "Kobe City designated garbage bags made by collecting PET (polyethylene terephthalate) bottle caps by all Kobe citizens".
Normally, Co-op Kobe collects PET bottles and bottle caps at its stores and sends them to its own recycling center, where they are sorted and pressed, and the caps are handed over to recycling companies. The bottles are recycled into transparent trays and egg cartons, while the caps are recycled into plastic products such as pallets and flooring materials.
In this initiative, the collected bottle caps were provided to a company commissioned by Kobe City, which used them as part of the raw materials to make "designated garbage bags for Kobe City households". The garbage bags were sold at 10 Co-op Kobe stores in Kobe City from 5 February to 4 March. 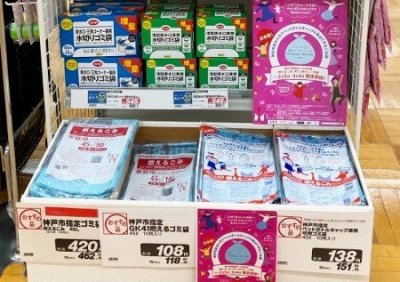