According to a report by the Ministry of Agriculture, Forestry and Fisheries issued in December 2020, dairy farming in Japan is hit by surging feed prices, aging farmers, shortage of successors, declining milk consumption and as a result, some farmers are going out of business, making it difficult for them to contribute to sustainable production. Many consumer co-ops support sanchoku production areas through collaboration, buying of products and given donations.
The Palsystem Group, upon the request from co-op milk producers that "clean towels are needed to produce delicious milk", has been donating unused towels provided by co-op members every year since 1985 to co-op sanchoku production areas. To prevent cows from being shocked when milking with these towels, producers soak them in lukewarm water and use them to wipe the udders and clean the milking machines.
Towels are used to help prevent infectious mastitis in dairy cows and produce good quality milk with fewer bacteria. In 2019, 54,000 towels were collected from co-op members, bringing the total to about 2.47 million since its start.  Thanks and support messages for the towels and milk production are given to the four sanchoku milk production areas of Palsystem. Towels are still being collected in FY2020. 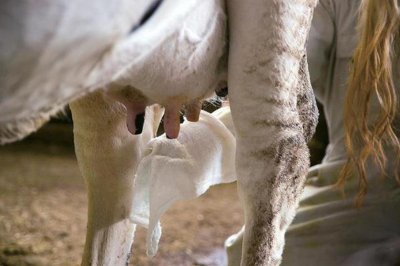