On October 24, 2020, the UN Treaty on the Prohibition of Nuclear Weapons reached the required 50 state parties for its entry into force.
The following day, October 25, Hiroshima Prefecture Consumers' Co-operative Union, along with Mayors for Peace, Peace Boat, ICAN, and the A-bomb survivors' group, held a rally in front of the Atomic Bomb Dome, to celebrate the 50 state parties ratifying the Treaty on the Prohibition of Nuclear Weapons and pledged further progress. 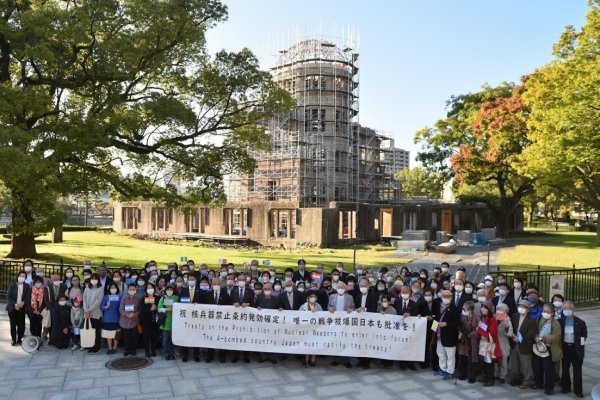 About 170 people participated in the rally, in which members of the A-bomb survivors' group put up a banner stating "Treaty on the Prohibition of Nuclear Weapons to enter into force! The A-bombed country Japan must ratify the treaty!" Mr. YUZAKI Hidehiko, Governor of Hiroshima, Mr. MATSUI Kazumi, Mayor of Hiroshima, and representatives of other related organizations took turns to greet the audience and share their joy and gratitude for all who have worked for the success of the treaty. 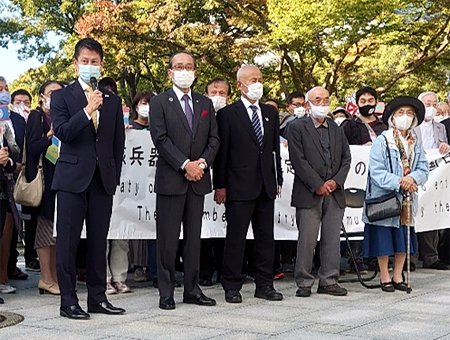 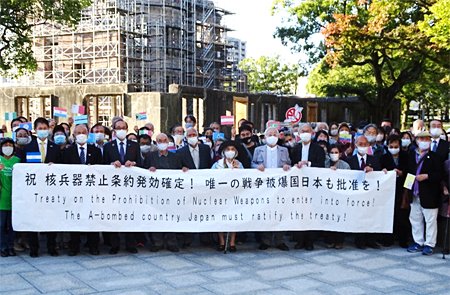 The A-bomb survivors' group officials holding a banner to celebrate the confirmation of entry into force of the treaty
The Japan Promotion Committee for the Hibakusha Appeal, a 48-group organization including the Hiroshima Prefecture Consumers' Co-operative Union, started the Hibakusha Appeal（International Signature Campaign） activities in April 2016 in response to calls from nine A-bomb survivors. As of September 18, 2020, the number of signatures collected in Hiroshima Prefecture reached 819,450 and 12,612,798 in Japan. It can be said that the Hibakusha Appeal, which conveys the wishes of A-Bomb survivors towards the elimination of nuclear weapons, played a major role in the entry into force of the Treaty on the Prohibition of Nuclear Weapons.
The ratification of the treaty by 50 state parties around the world has been a major step towards starting concrete discussions on the abolition of nuclear weapons. However, nuclear-weapon states and countries under the U.S.nuclear umbrella, such as Japan, have not participated in this treaty. Taking this treaty, which will come into effect on January 22, 2021, as the first step, it is important to continue to make constant efforts in shaping public opinion that "nuclear weapons cannot coexist with humans" and for the abolition of nuclear weapons.