Aomori Consumers' Co-operative Union's "Co-op mutual support club" is a member-based mutual support club that started in 1998 in response to the request of members that it would be nice if they could help each other in times of need. Currently, there are secretariat offices in four areas, Aomori, Hachinohe・Misawa, Hirosaki・Kuroishi, and Mutsu・Shimokita.
The Co-op mutual support club is a paid activity that connects coop members who need help in their lives (users) with those who want to help (helpers). The co-op acts as a coordinator and introduces helpers according to the user's needs. This activity started at Co-op Kobe in 1983 and is now being carried out by many co-ops. Support includes cooking meals and cleaning, shopping, watching over them, talking to them for elderly families, helping with childcare for those raising children, and supporting the lives of people with disabilities.
Co-op Aomori has approximately 450 registered members, including  200 for A members (users), 100 for B members (helpers), and 150 for C members (supporters of help). 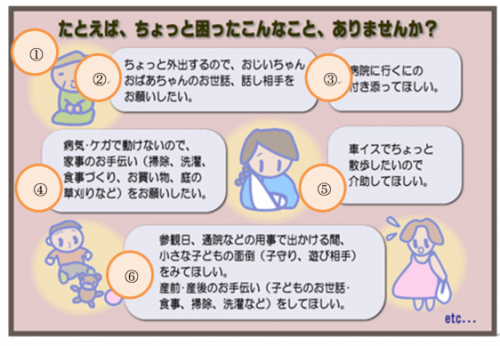