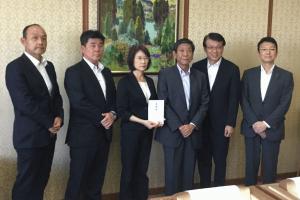 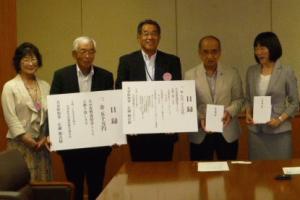 In July, heavy rains hit northern Kyushu in Japan causing extensive damage in Fukuoka and Oita prefectures. Landslides were reported in several areas and some people were also reported missing.

As an emergency fund, JCCU and its member coops granted a sum of money as a gift from their reserve fund for disaster recovery to show their sympathy in July, while fund raising was also organized through co-op stores and home delivery outlets until August 21. The donation received has been donated to the two prefectures.

Similarly, on September 4, 2017, the chairperson of the Oita Prefecture Consumers' Co-operative Union Mr. AOKI Hironori and ARAI Chitose, VicePresident of JCCU paid a visit to Oita prefecture and presented an amount of 64 million JPY to the Oita prefectural governor, Mr. HIROSE Katsusada.

Ms. OMAGARI in her remark said "We will deliver the donation received and as well as send your heartfelt feelings to the afflicted areas, suffering enormous damage such as agricultural land, forests, etc. Restoration is still half way but we will continue efforts to evacuate people and advance local reconstruction exercise."

Similarly, Mr. HIROSE who received the fund with a feeling of gratitude mentioned that “Hita city in Oita prefecture which suffered great damage from the heavy rain disaster five years ago saw reconstruction from the damage a big challenge and almost lost strength. Receiving this fund is a strong encouragement and a restoration of hope for everyone in the disaster area. I will carefully use it as a reconstruction support fund."

JCCU will continue to work with consumer coops nationwide on various support activities to assist people who will fall victim to disasters.