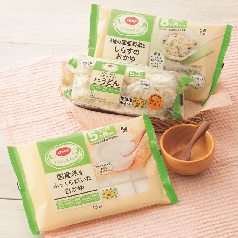 The three design missions of the award” are; “Contribution to the safety and security of children" "Pioneering children's creativity and the future" and "Easy to give birth and raise children". It aims to pick up outstanding products, facilities, programs, research activities for children, adults caring for children and child rearing, and for the general public.

This time, "CO·OP Kirakira Step" contested in the “product design department which helps parents give birth and raise children" and won the Kids Design Award. This is the first time CO·OP Brand P (JCCU’s PB) has received a prize in this contest. "CO·OP Kirakira Step" mainly focuses on frozen food for infants and kids that are rare in Japan. Under the supervision of a national registered dietitian, JCCU has designed the optimal size, texture, ingredients selection and additional recipes according to the child’s age and it is responding to the growing needs for child-rearing households. In addition, information such as allergen and salt equivalent are displayed on the front of the package in an easy-to-understand manner.

JCCU conducted 8 group interviews, with a total of 99 people including 33 infants through registered monitors of Co-op members who are actually raising children to get their views at the prototype stage of development and exchanged views about the product. JCCU will continue to extend this support in the future.