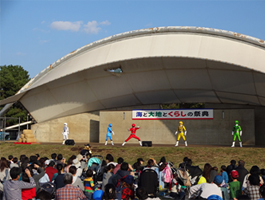 The Chiba Prefectural Cooperative Promotion Council made up of JA Group, the Fisheries Co-op, the Forestry Co-op and the Consumer Coops in Chiba Prefecture, on November 6, held the 27th Chiba Prefecture Co-operative Festival in collaboration with NHK Chiba Broadcasting Bureau. It was well attended by approximately 25,000 people including parents and children.

The purpose of the festival was to provide a platform of exchanges between the various co-op movements in the prefecture and to appeal or raise the visibility of cooperatives to the prefectural people. It was held for the first time in 1988.

This time, apart from the co-op groups, Chiba Workers Welfare Council and the UNICEF Association of Chiba Prefecture also participated in the exhibition.

Several events took place in the booths set up by the participating organizations such as the sale of fruits and vegetables and other products produced in the prefecture to appeal the safety, reliability and the value of agricultural products from the Chiba Prefecture.

In some booths food tasting was held. Part of the sales proceeds would be donated to the International Children's Fund (UNICEF) and part be used for the recovery of the Kumamoto earthquake.

In some booths, through quizzes, participants deepened their understanding of co-op philosophy and food.