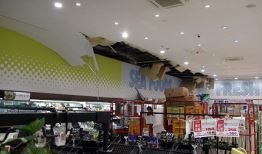 A massive 7.3 magnitude earthquake struck the south-western island of Kyushu close to Kumamoto city in Japan on April 14 and 16 2016 causing widespread damage. As of April 26, the official death toll has been reported to be 49. More than 1,300 people are injured and there has been widespread damage to buildings, houses, roads and bridges. More than 48,000 people remained housed in temporary shelters.

Upon the request of the Ministry of Health, Labor and Welfare (MHLW), JCCU and its affiliated companies together with the member Co-ops have extended assistance to the disaster-stricken area, with a huge support of suppliers. The ministry requested assistance from JCCU and member co-ops to help Kumamoto prefecture cope with the deadly earthquake based on the co-ops extensive experience in dealing with natural disasters and recovery activities as put into practice during the Great Hanshin-Awaji Earthquake which hit Kobe city in 1995 and the Great East Japan Earthquake and tsunami that struck Tohoku and Kanto region, and Fukushima Daiichi nuclear disaster on March 11 2011.

Receiving the request from the ministry, JCCU quickly appealed to the member co-ops nationwide for an urgent fund-raising to support the rebuilding of the victim lives and the revival of the stricken area. The fund raising has been launched from April 15 to June 20 through co-op stores and the home delivery outlets. 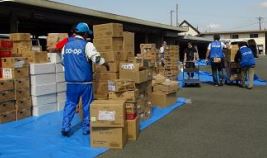 To provide a proper support to meet the needs of the stricken area, JCCU has set up a task force on the day of the earthquake headed by Mr. SHIMADA Hiroyuki, the Managing Director/CEO, to coordinate activities such as supporting reconstruction of co-op business in the stricken area, rebuilding of victims living through volunteer activities and the transmission of information about the support activities to the members and the Diet.

To assist victims affected by the earthquake, 10 co-op staff from co-ops nationwide and business federations, were sent to the stricken area between April 23 and 25. JCCU also dispatched 31 staff on April 20, making a total of 41 staff dispatched to the stricken area for the purpose of assisting the local task force in Kumamoto with the unloading and sorting of relief supplies for early delivery to victims upon the request of MHLW.

On April 25 JCCU sent 40,000 Retort rice, 34,168 canned food, 4,300 retort pouch, 39,588 cup noodles, 7,883 vegetable juice, 15,000 bread, all totaling 140,939 items to the stricken area. The Health and Welfare Co-operative Federation of Japan (Hew CO-OP) has also sent donations, and dispatched doctors to the disaster zone. On April 27 Hew CO-OP in co-operation with JCCU conducted health consultation for co-op members in the stricken area in one of the stores of Co-op Kyusyu.

The Home Delivery business was greatly affected between April 18 to 22 where ordered items to 1,765 households were cancelled for some reasons such as collapsed houses that has resulted in members living in temporal shelters, bad road condition and the like. At areas where delivery was possible the co-op provided members with water supply tanks.

The Kasuga, Koshi and the Onoue stores of Kumamoto co-op carried out earthquake support sales on April 24 with apples and banana. The Kasuga store started operation in all its departments, however, the sales floor area was limited to about one-third. Store restoration work has begun and it is estimated that 80 percent of the work would be completed by April 28 and a full restoration is expected to be completed by May 3.

The stricken area condition is still not fully understood making it a bit difficult to assign volunteers for the proper and required assistance. For now, JCCU in collaboration with health care institutions as well as volunteer health care workers with specialized skills to perform health management and care of the elderly and people with disabilities have advanced care voluntary activities. For general volunteer activities, JCCU will continue to consult with the prefectural consumer cooperative union and the local social welfare council to implement a comprehensive volunteer support center for the purpose of helping the victims as well as the overall reconstruction exercise.